Discover the craft - How are Terracotta pots made?

It is fascinating to see how are terracotta pots made by hand. The process begins with a ball of clay that is slowly worked and shaped into a pot. Once the pot is the desired shape, it is then dried and after that placed in a kiln to harden. They are not only beautiful but also durable, making them perfect for both indoor and outdoor use. 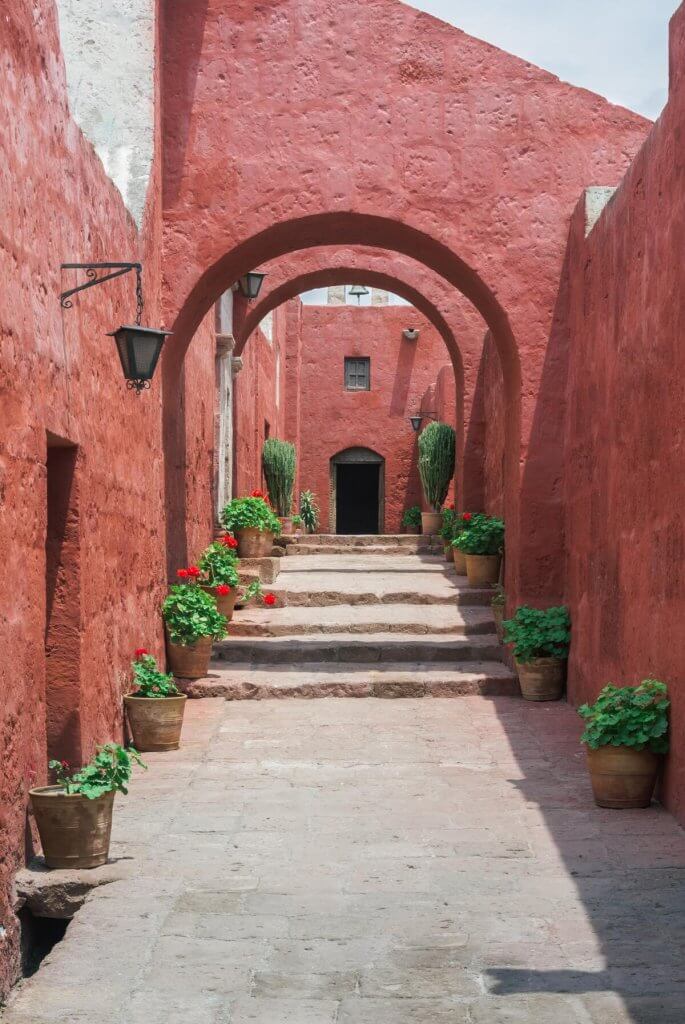 They created a variety of vessels, that were used for everyday tasks such as cooking and storing food.

How Indus Civilization Pottery was made

How to make clay Pots without a wheel?

The Indus Civilization people made pottery using a process called coil and scrape. They would start by creating a base, often in the shape of a bowl, by coiling strips of clay on top of each other. Once the base was formed, they would smooth and shape the pot using a scraping tool.

The pottery is also characterized by its high level of skill and craftsmanship, with pot and bowls that are symmetrical and well-formed.

Indus Civilization pottery not only served functional purpose but also played an important role in the religious and cultural life of the civilization. Pottery also gave an insight into the daily lives of the Indus people and their beliefs, customs, and social organization.

Today, Indus Civilization pottery serves as an important source of information for historians and archaeologists studying this ancient civilization.

If you would like to learn more about the Indus civilisation & how to make large terracotta pots or how to make clay pots without a kiln , then there are plenty of resources available online and in libraries. You can also visit some of the archaeological sites where the Indus people once lived, such as Mohenjo-daro in Pakistan.

How are terracotta pots made today?

Today, modern pottery techniques such as the potter’s wheel and kiln firing have allowed for mass production, making them widely available and affordable for gardeners, farmers & households. 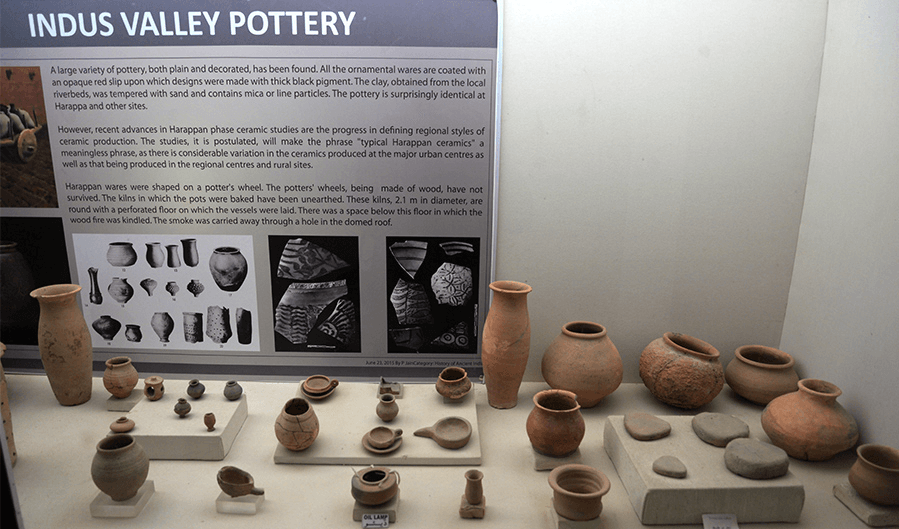 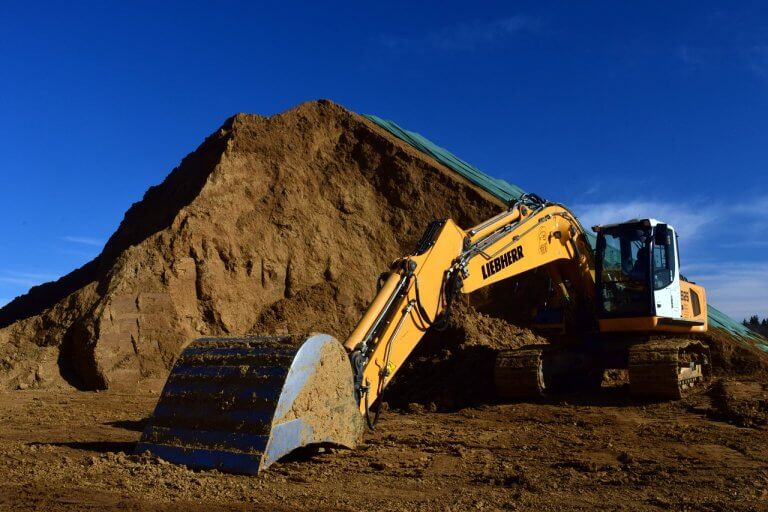 Excavation Of Finest Clay For Pottery​

When it comes to crafting the perfect terra cotta, the quality of the clay is of utmost importance. That’s why the best potters only use the finest clay available for their wares. This clay is usually excavated from riverbanks or other bodies of water.

Kneading clay is an important part, it helps to remove impurities from the clay and make it more pliable.

To knead clay, start by wetting your hands and the clay itself. This will make it easier to work with and prevent the clay from sticking to your hands.

Then, fold the clay over on itself and press down with your palms. Continue doing this until the clay is smooth and free of lumps.

Once you’ve got your clay ready, you can start shaping it into anything you desire! Kneading the clay is an essential step to ensure the final product has a smooth surface and the desired shape. 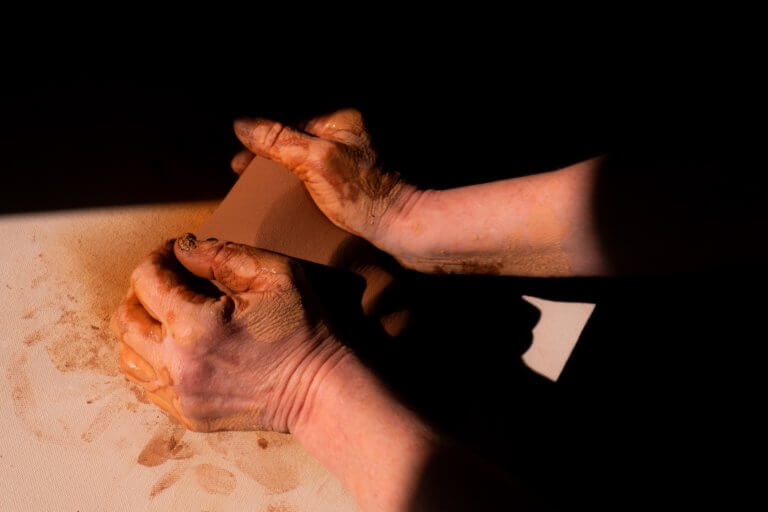 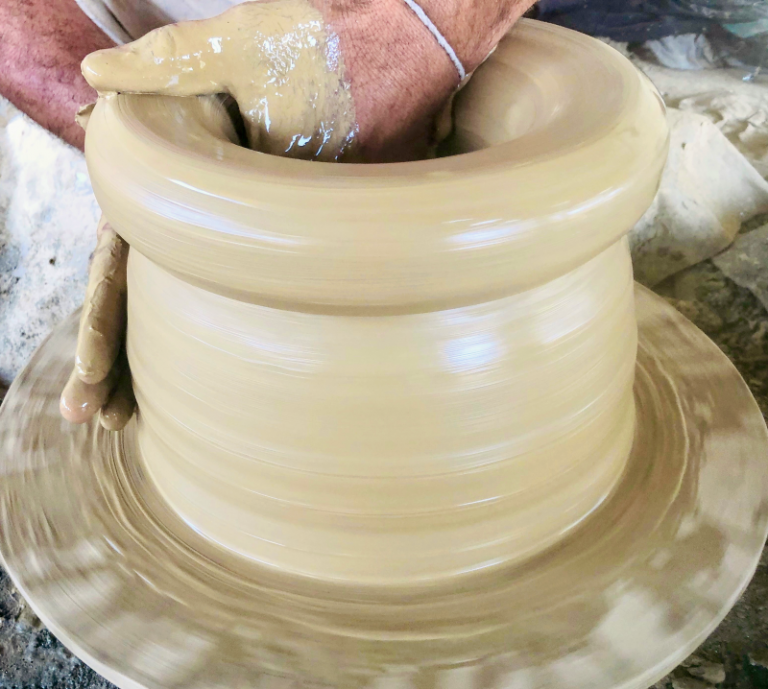 When it comes to throwing on a potter’s wheel, there are a few things you need to keep in mind.

Consistency of the Clay

First, make sure the clay is at the right consistency. If it’s too wet, it will be difficult to work with; if it’s too dry, it will be brittle and may crack during firing.

Measure the Diameter of the Base

Second, use a piece of thread or twine to measure the diameter of the base of the pot before you begin throwing it. This will help you create an evenly-sized pot.

Finally, when you’re finished throwing the pot, use a sharp knife to cut off any excess clay from the rim. This will give the pot a clean and finished look and make it easier to handle during the next steps of the process.

Now they need to be dried before they can be fired. The drying process can take anywhere from a few days to a few weeks, depending on the size and thickness. To speed up the drying process, potters often place them in a kiln or an oven set at a low temperature. This helps to evaporate any moisture that is still inside the pot. Once it is dry, it can be fired.

After firing, it’s important to check its quality before shipping it to the customer. This step is called Quality Check and Inspection.

We start by looking at the pot carefully to make sure it has no cracks, chips or any other defects. We check if the pot has been made to the correct size and shape.

If the pot passes all these checks, it is considered to be of good quality and ready to be shipped to the customer.

If the pot fails any of the checks, it will be fixed or rejected.

This is a step that we take to make sure the pots we make are of good quality and ready to be used by the customer. We check for defects, size, shape, color, weight, and durability to ensure that the customer gets a perfect flower pot.

We make sure that once the pots have passed the final inspection and quality check, they are packaged properly to ensure they reach the customer in good condition.

First, we clean the pots thoroughly to remove any excess clay or debris, using a soft cloth or brush to avoid any scratches or damage. Then, we nest the pots with packaging material to prevent damage during transport.

Next, we place the pots on wooden pallets that are sized to accommodate them, with enough room for additional packing materials to keep the pots secure & shrink wrap them. We label the pallet with the appropriate handling instructions and the destination address.

After that, we ship the pots via a freight carrier, depending on the destination and quantity of pots being shipped.

It’s crucial for us to work with a reliable and experienced packaging and shipping company to ensure that the pots are handled with care and reach the customer in perfect condition.

Packaging for shipment is an important step in the process. We take great care to package the pots properly to ensure that they reach the customer in good condition and ready to use. 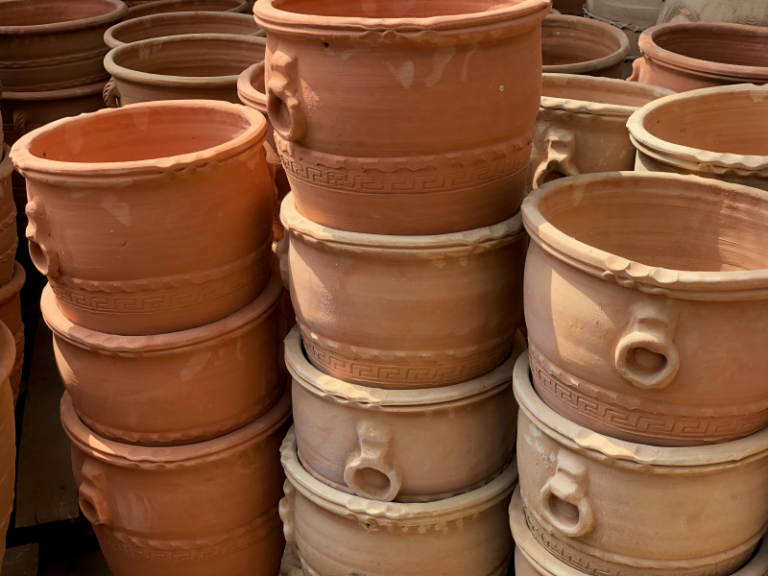 Firing is typically done in a kiln, which is a type of oven that can reach very high temperatures. They are made by first shaping the clay into the desired form. Once the pot is shaped, it is then dried, then placed in the kiln and fired at a high temperature.

Firing helps to make them stronger and more durable. If they have been fired correctly should be light pink color. If they are not fired correctly, they can develop cracks or other imperfections.

What are the benefits of using terracotta pots?

Terracotta clay pots have a number of benefits that make them ideal for use in the home or garden. They are extremely durable, long-lasting and low maintenance, meaning they require little care once they are in place.

Terracotta is also a very effective material for regulating temperature, making it ideal for plants that require warm or cool conditions to thrive. Additionally, they are very attractive and can add a touch of style to any space.

They are a popular choice for container gardening for a number of reasons. Available in a variety of sizes and styles, so you can find one that is perfect for your garden.

Terracotta pots can be used to grow a wide variety of plants, including herbs, vegetables, and much more.

One of the main benefits is that they absorb and release moisture, which helps to regulate the temperature and humidity of the soil.

Another advantage is that they can be decorated and painted in a variety of styles to match the aesthetic of your garden, adding a unique touch to your outdoor space. 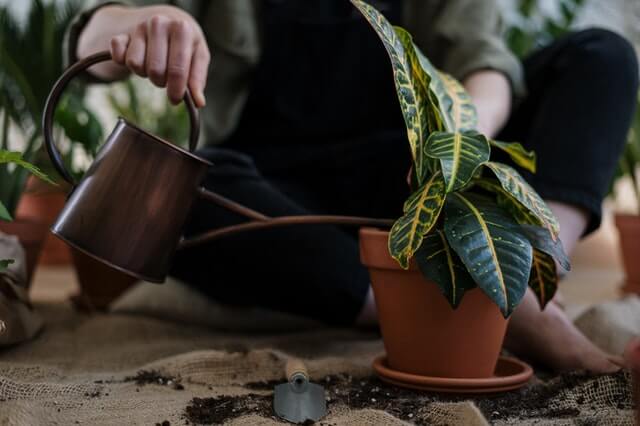 Terracotta plant pots are a beautiful and classic addition to any home, but they require a bit of special care to keep them looking their best. Here are some tips:

Keep them out of direct sunlight. Too much sun can cause the pots to crack or fade.

Water them regularly, but be sure not to overwater. Terracotta is a porous material and can easily become waterlogged, leading to cracking or other damage.

If the pots start to show signs of wear, you can lightly sand them with fine-grit sandpaper to smooth out any roughness.

To protect your pots from the elements, you can seal terracotta. Be sure to use a something made specifically for terracotta pots so that it doesn’t damage the material.